This is my second installment on my new and improved ASL counter storage using Raaco inserts and Duratool (Raaco clone) storage cases.  Once I decided to use the Raaco storage system, I had to organize it.  This is my engineer side talking here.  I created a diagram of where all of the counters would go, using the Raaco insert layouts.  Here is an example of the Japanese organization: 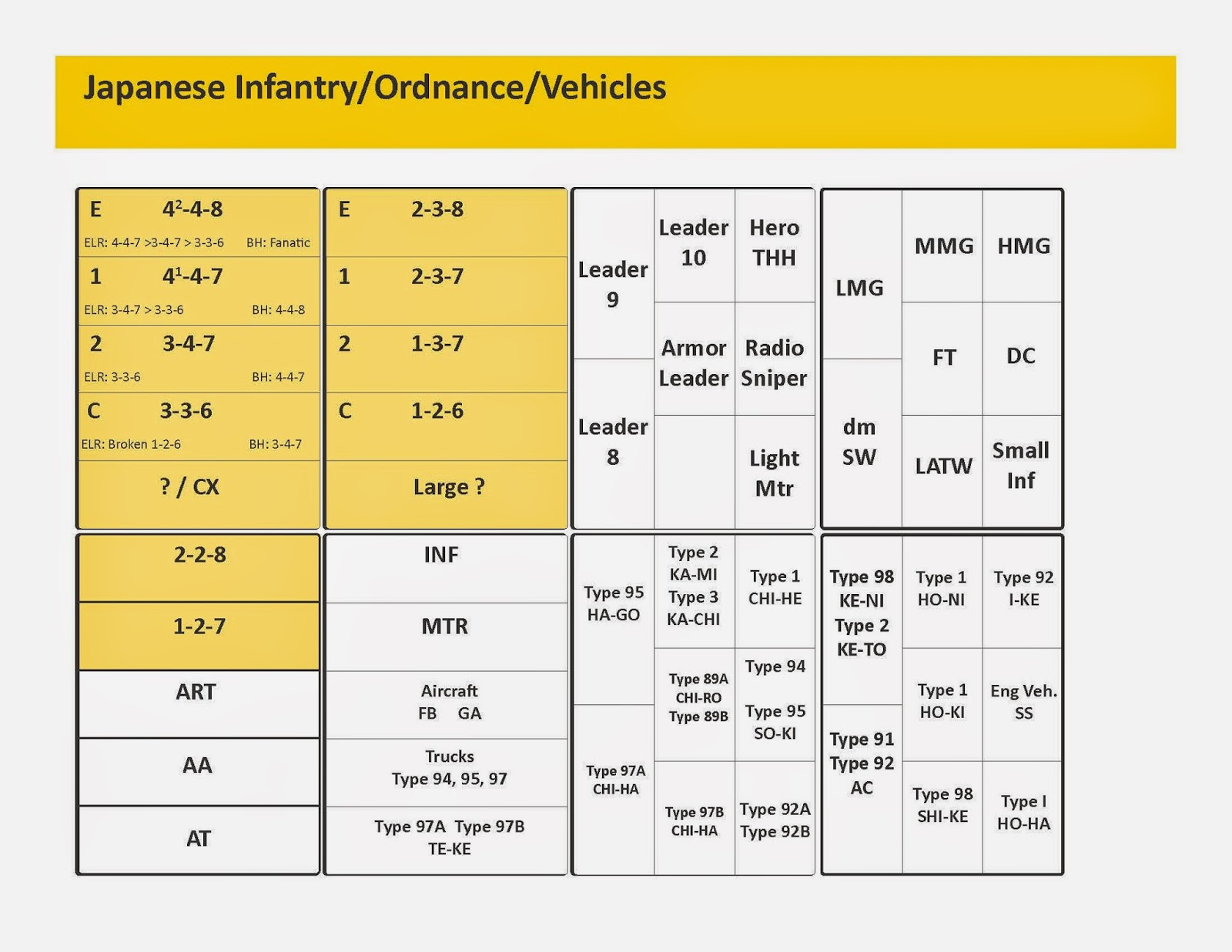 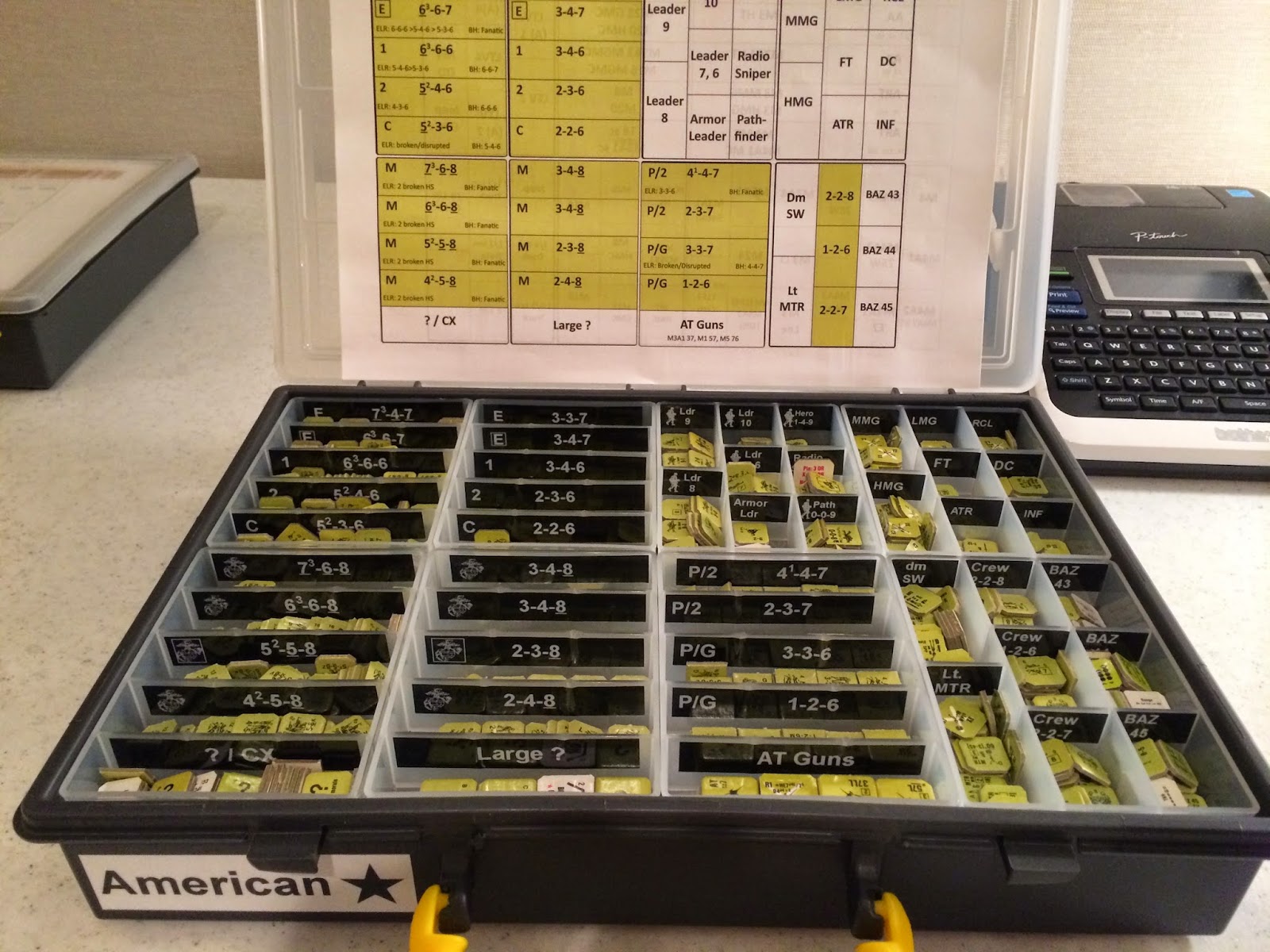 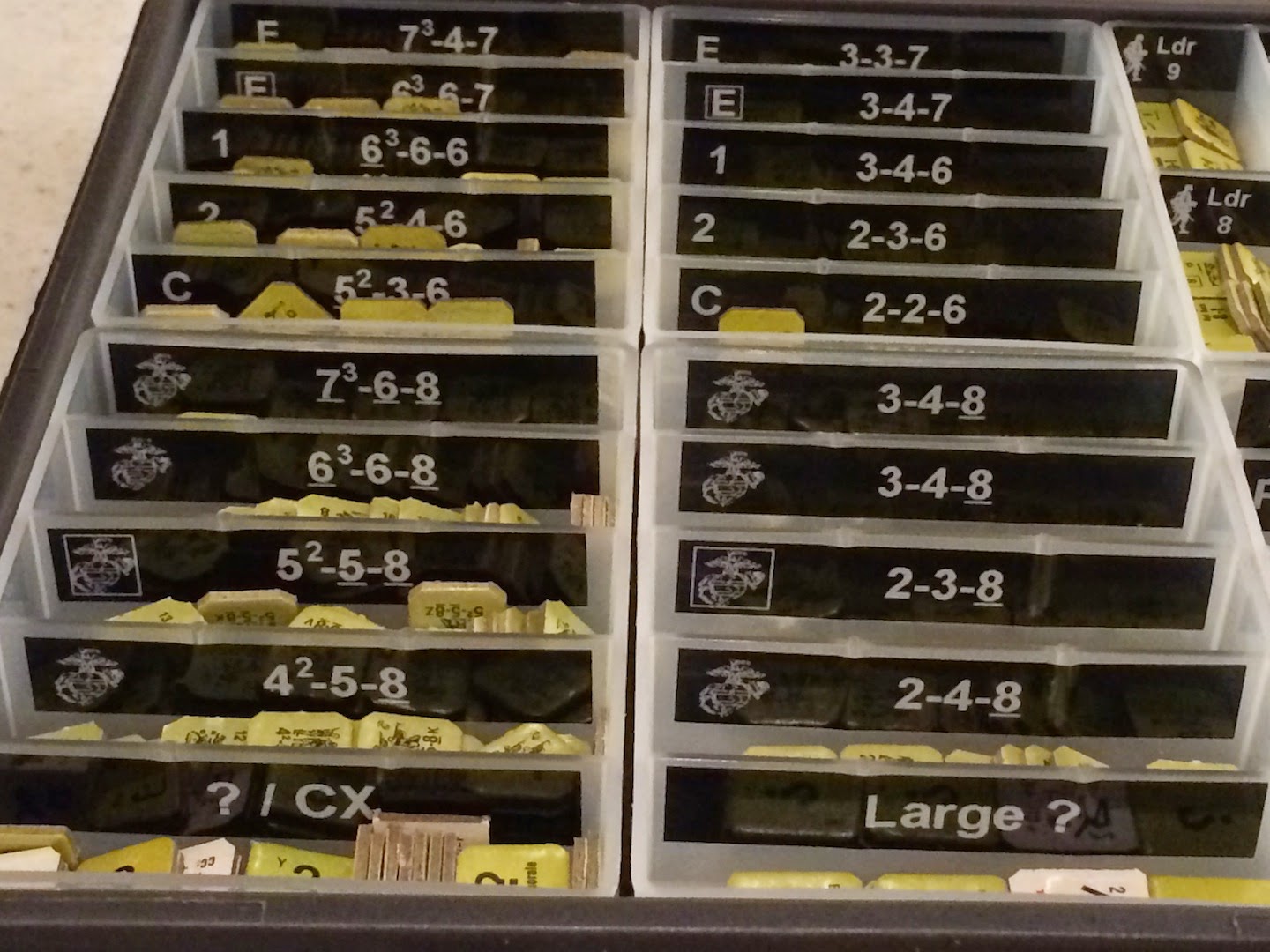 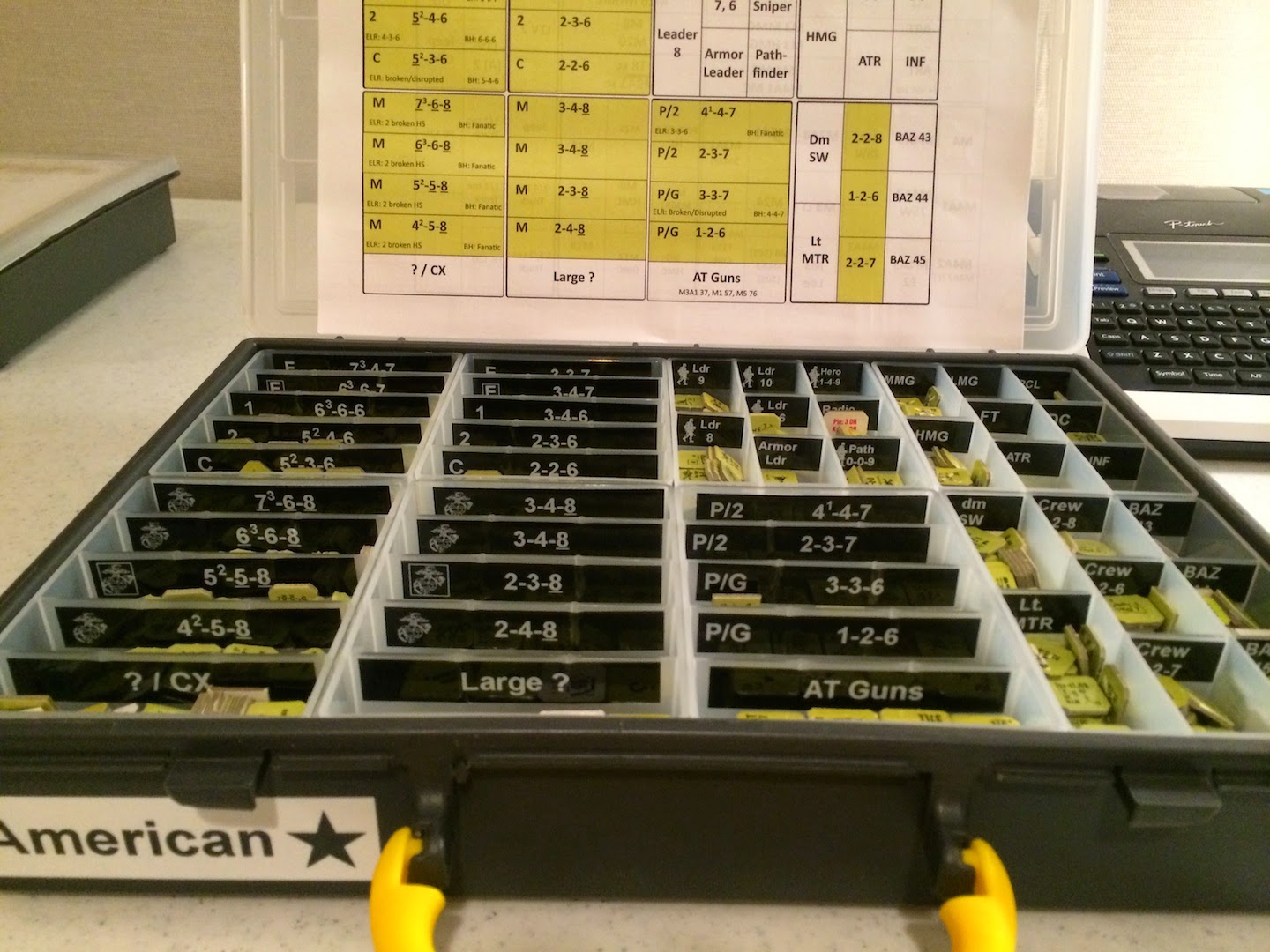 Below is my entire ASL army in two Duratool Handy Box clones, with 8 storage boxes.  I have one extra on top, which I may use for informational counters or the Finns when they come out! 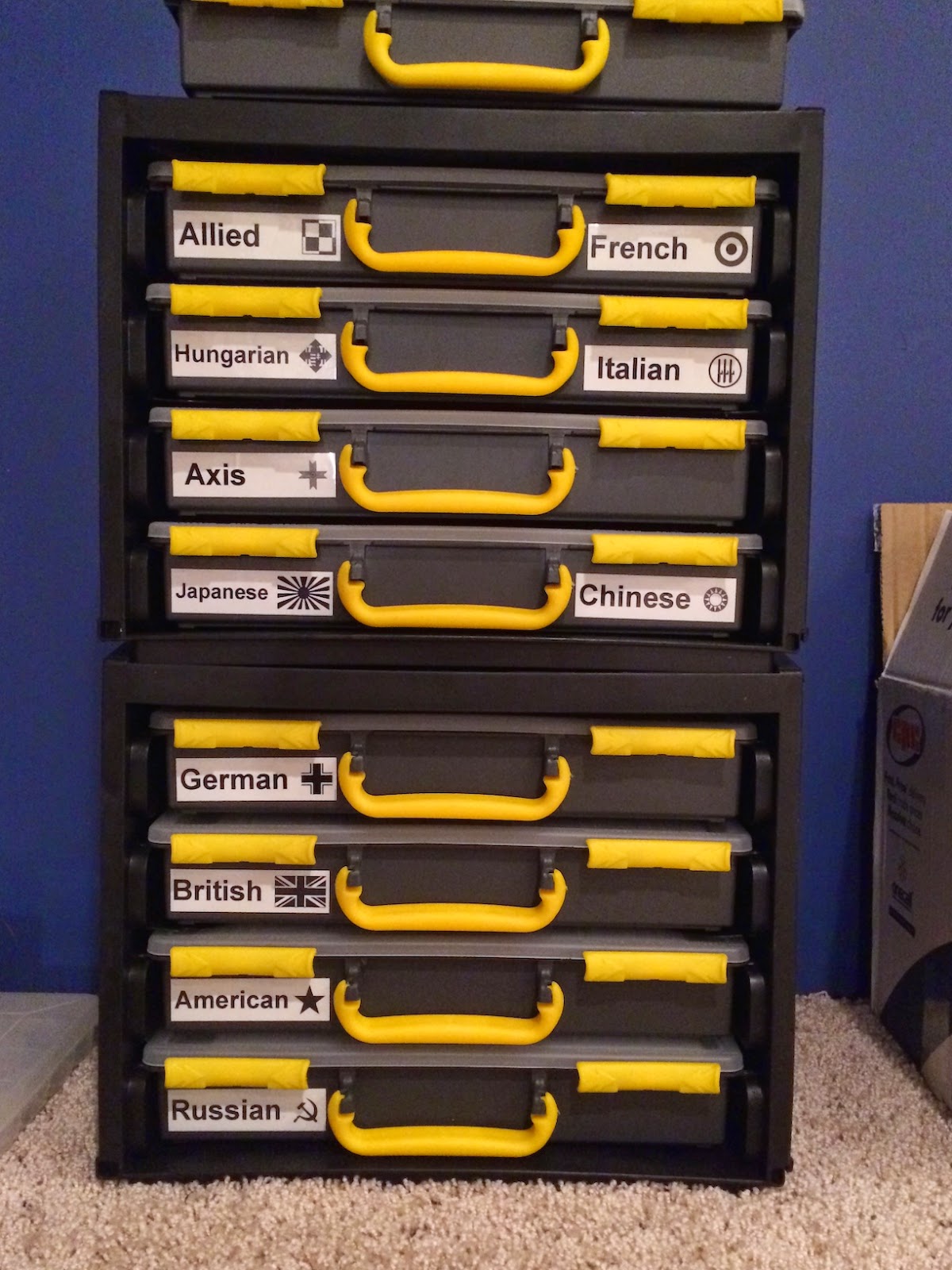 Well, I finally broke down and organized my ASL counters with Raaco.  Sort of...  I was able to find Raaco clone boxes by Duratool at MCM Electronics here in the U.S., and purchased Raaco A75 and A78 inserts from CPC Farnell in the UK.  The Duratool clone set of 4 boxes with carrying case (similar to the Raaco Handy Box with 4 cases) was only $30.  Each separate PSC4-01 clone box was only about $6.  The Raaco inserts were fairly inexpensive even when buying them from the UK and shipping them to the U.S.

Here's the Duratool Raaco PSC4-01 clone box.  It looks exactly like the Raaco box, except that it is Black and Yellow. 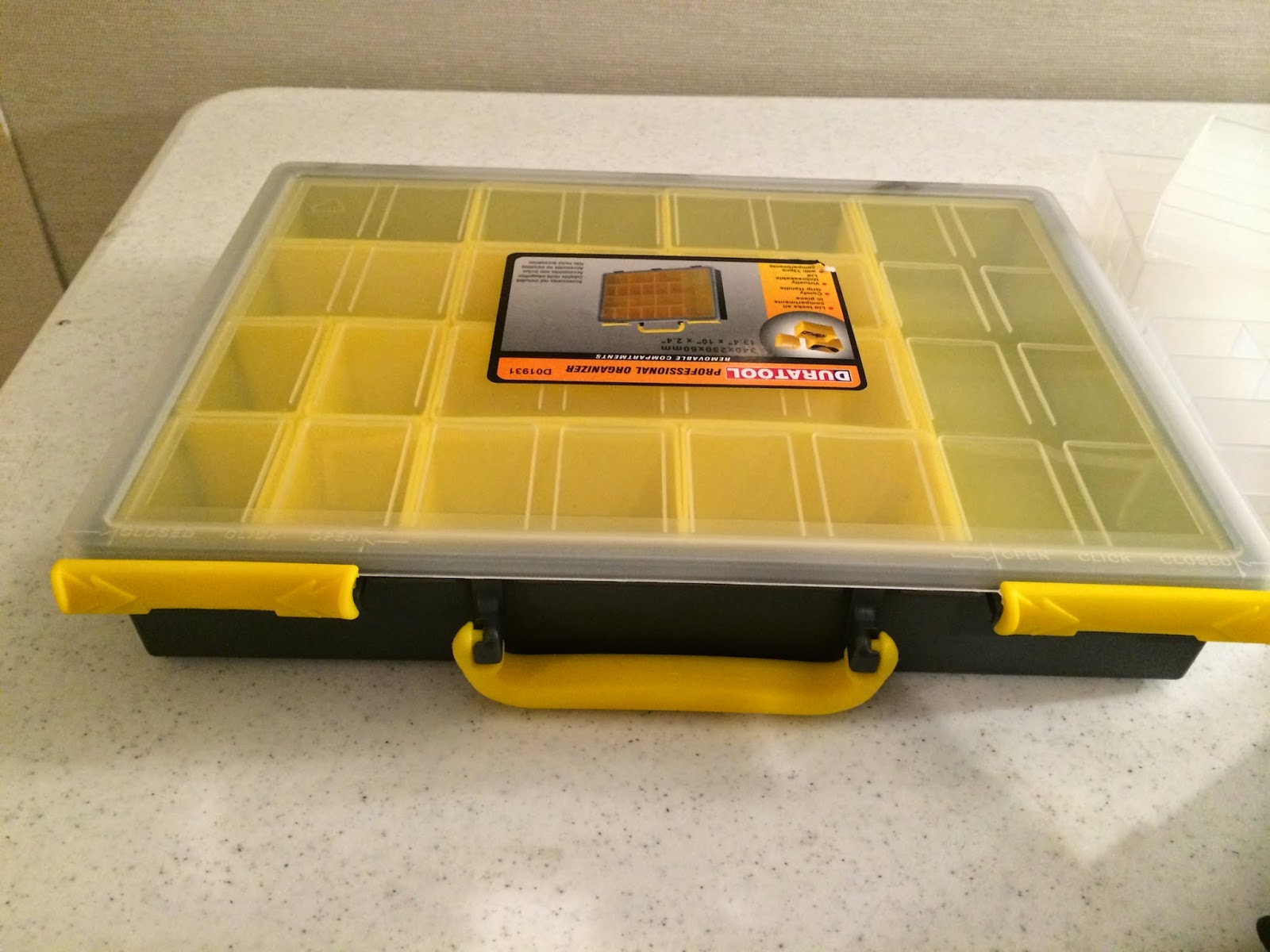 The Duratool box comes with several Raaco clone inserts that are as deep as the box itself.  They are cheaply made and most of them are warped slightly.  I basically tossed them in a box and am keeping them for my wife for crafts or something. 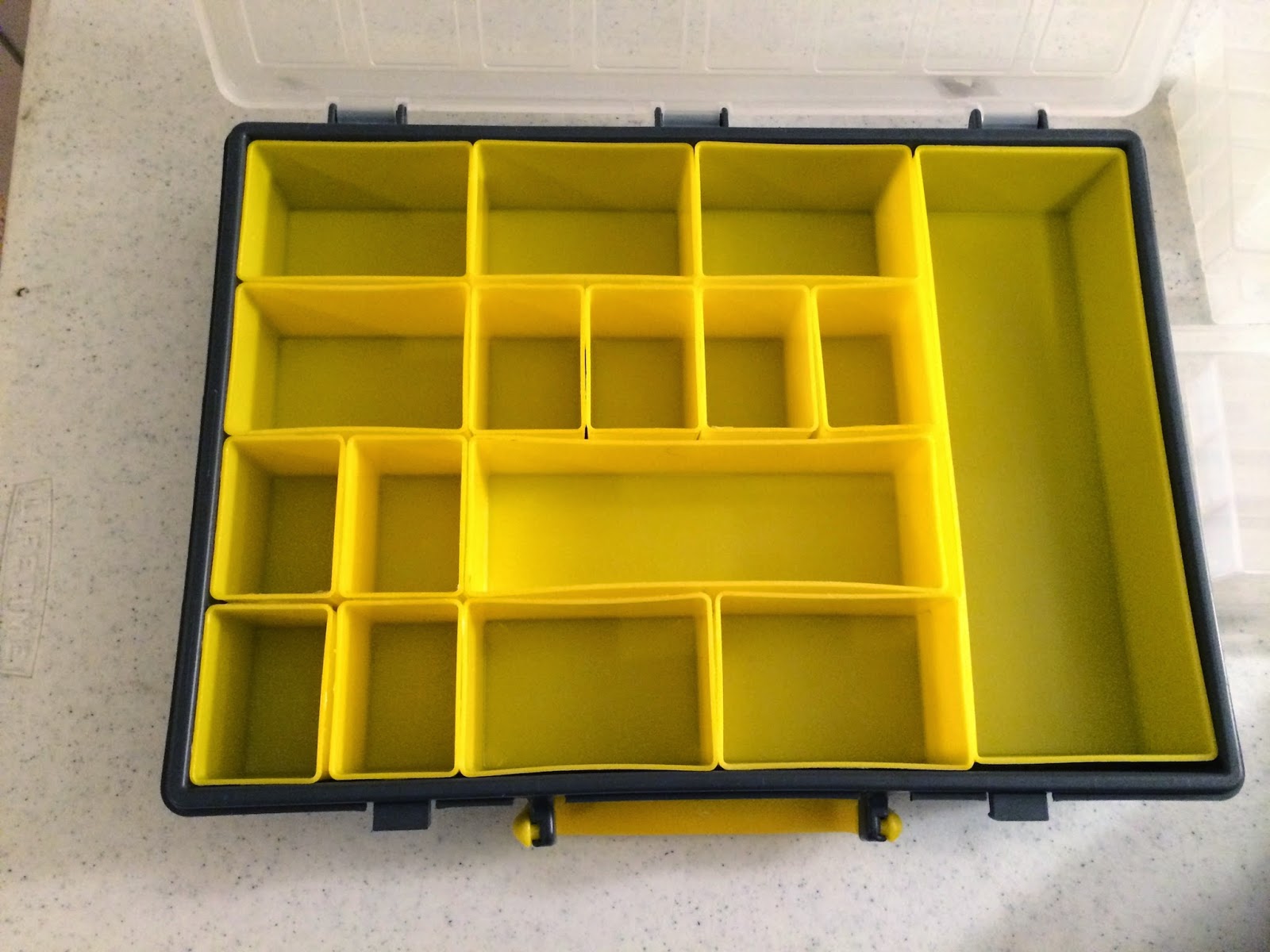 Another view of the Duratool box. 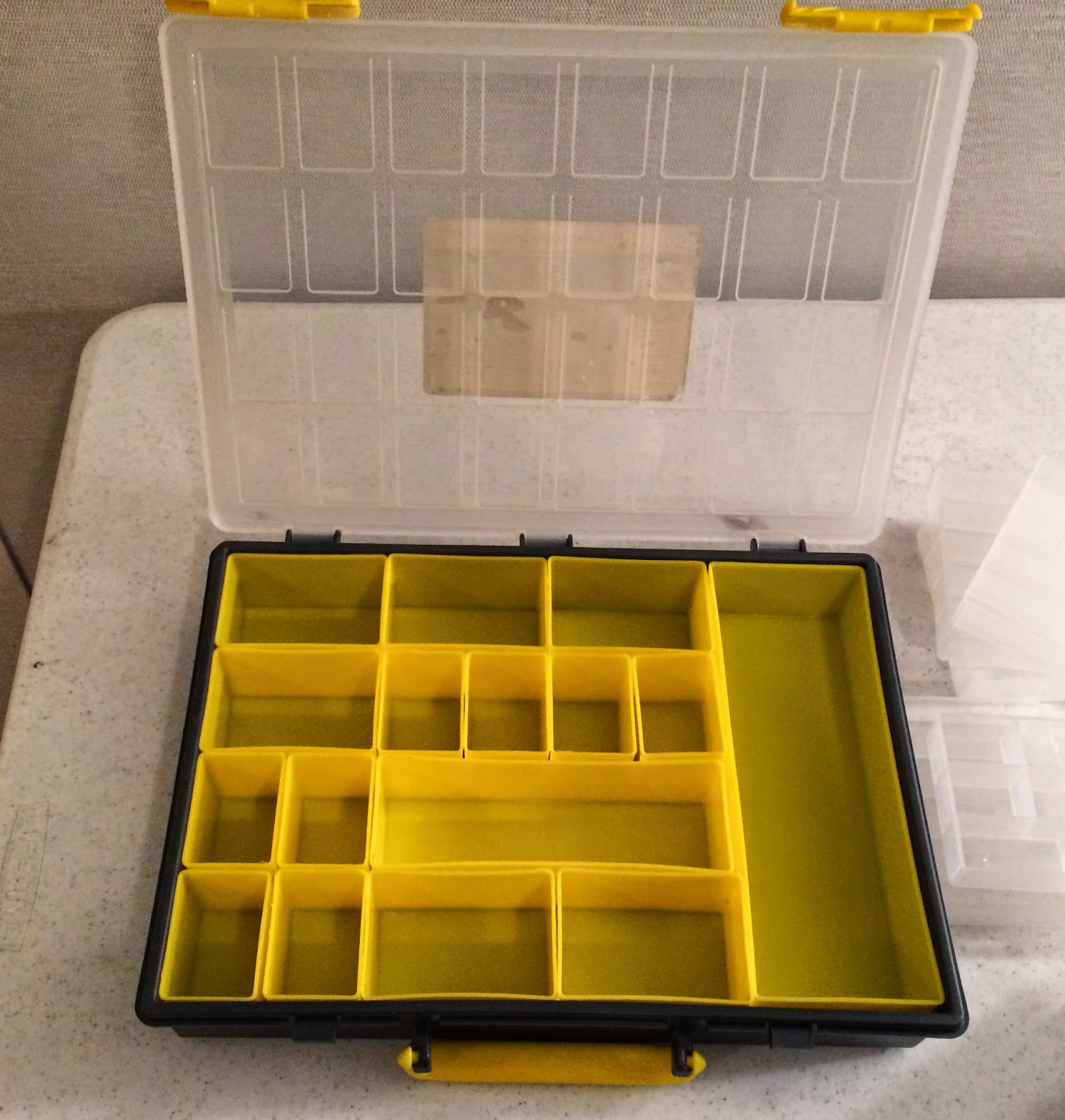 Below are a few pictures of two of my boxes, one British and one the Japanese/Chinese box.  I'll show some photos now and in another post or two, probably tomorrow and later this week, I'll explain my organization, my labeling technique and post PDF diagrams of my organization. 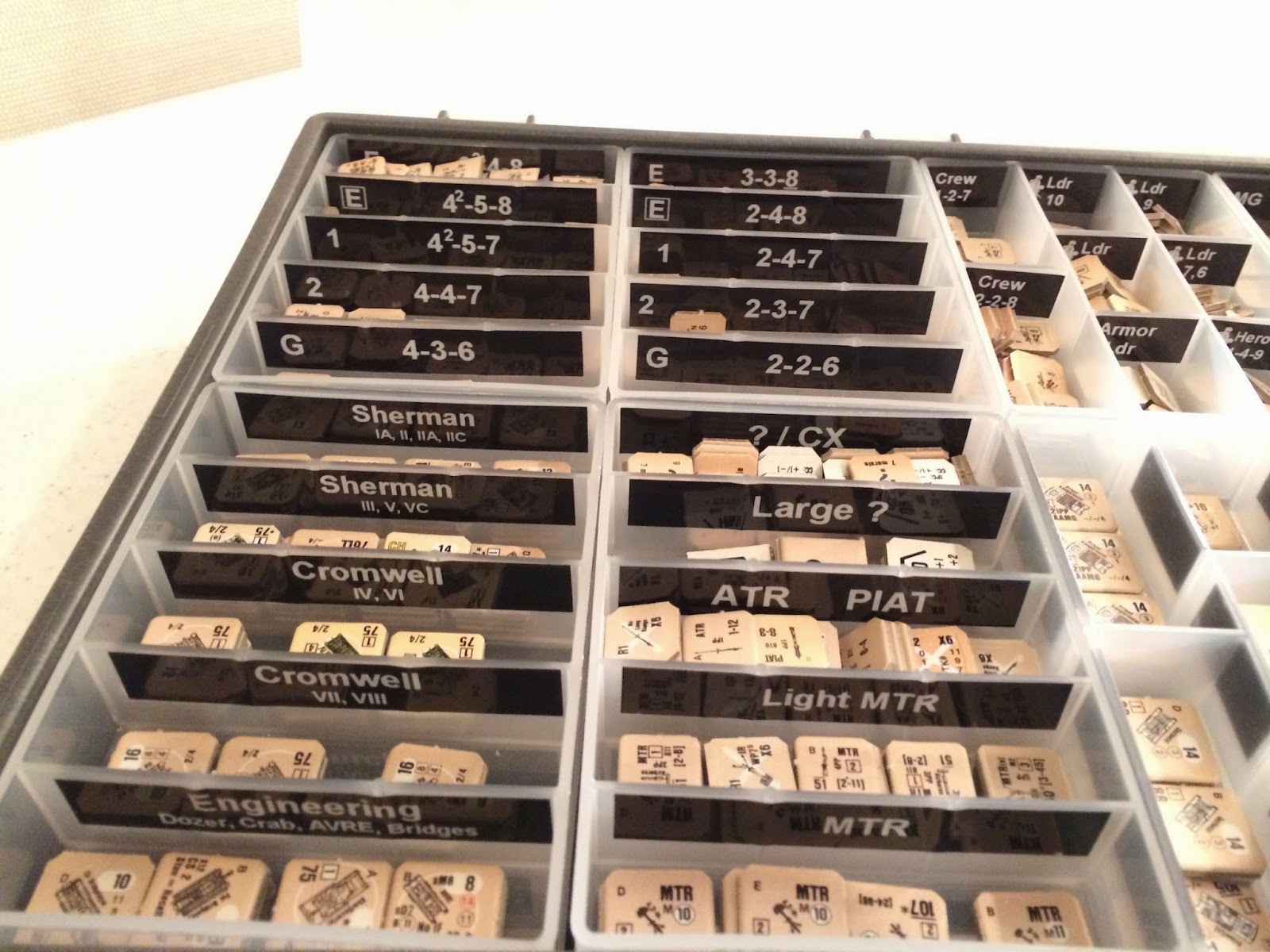 Here are two pictures of my Japanese/Chinese box.  The Japanese are on top, while the Chinese are in the layer below. 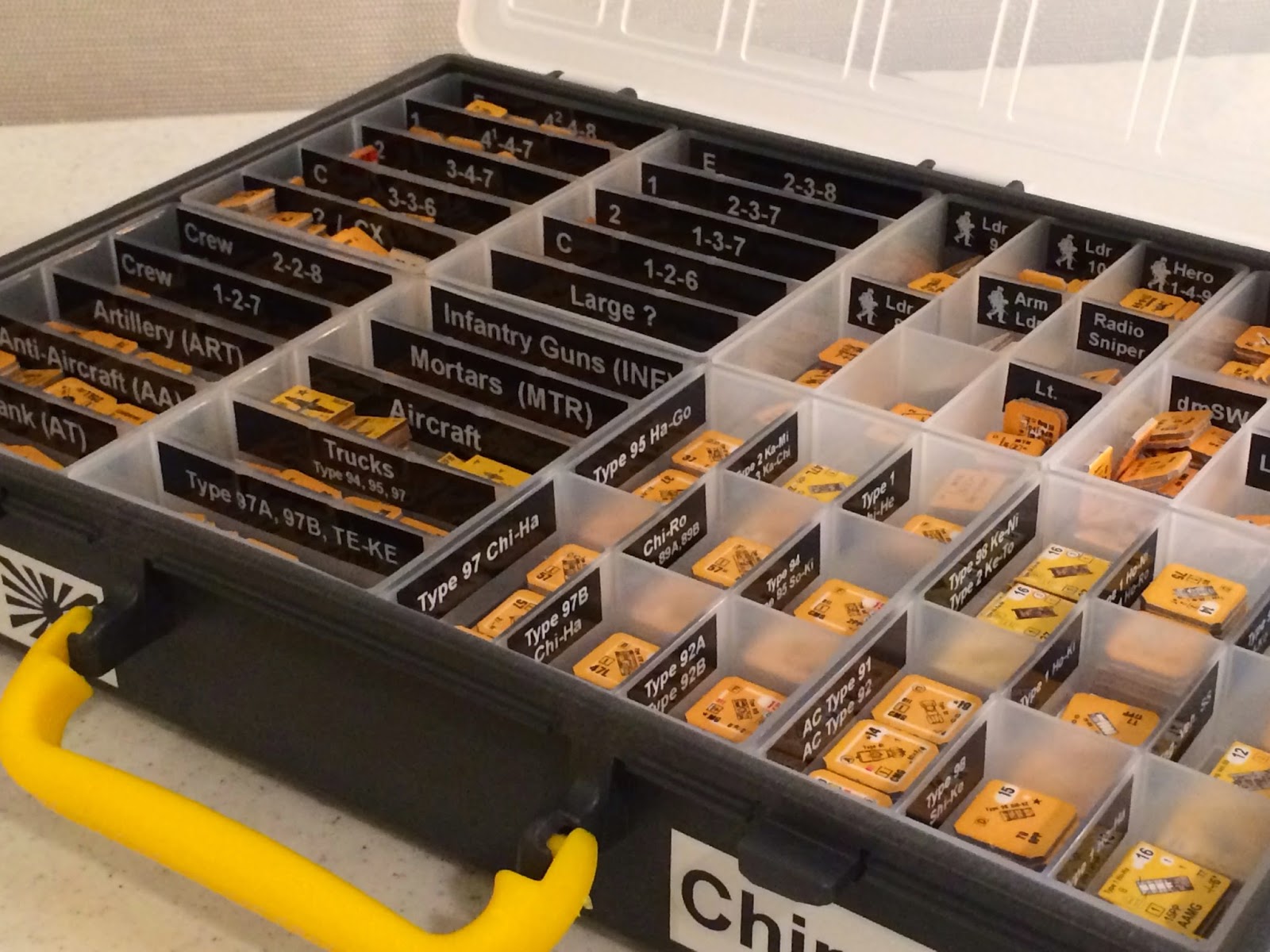 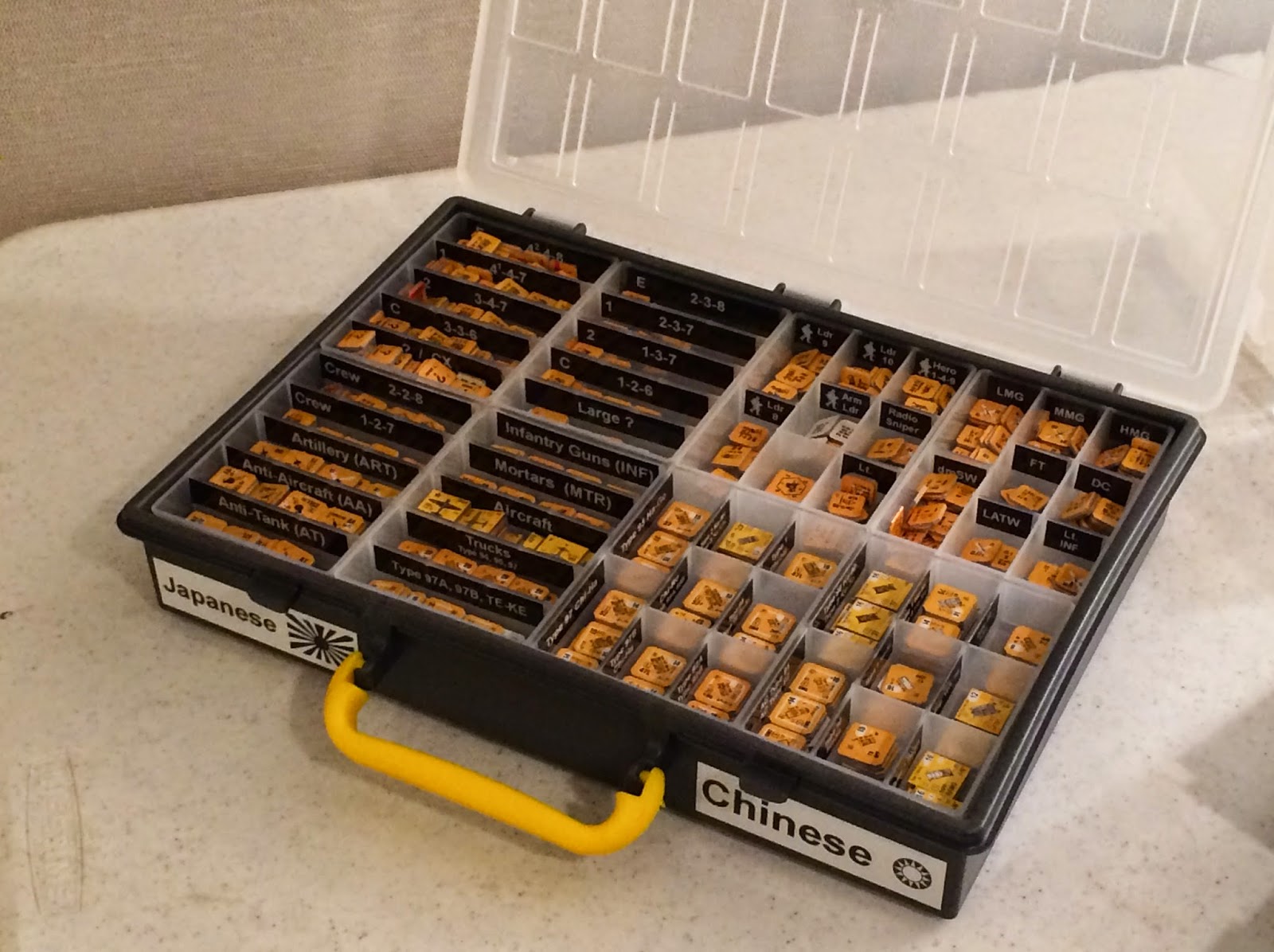 Just wanted to let everyone know about the St. Louis ASL Club's first historical magazine coming out next July at our tourney. The first issue is on Burma, 1942, when the Japanese invade. See the flyer below. We are currently playtesting several scenarios on an historical map, and are planning to have 8-10 more scenarios on various map boards (several are also in playtesting). The full color magazine will contain at least 48 pages of articles on various subjects, ranging from an intro to the CBI theater of 1942, Japanese tanks and tank tactics, rice paddies, AAR's/designer notes on the scenarios, and much more stuff. More details to follow! 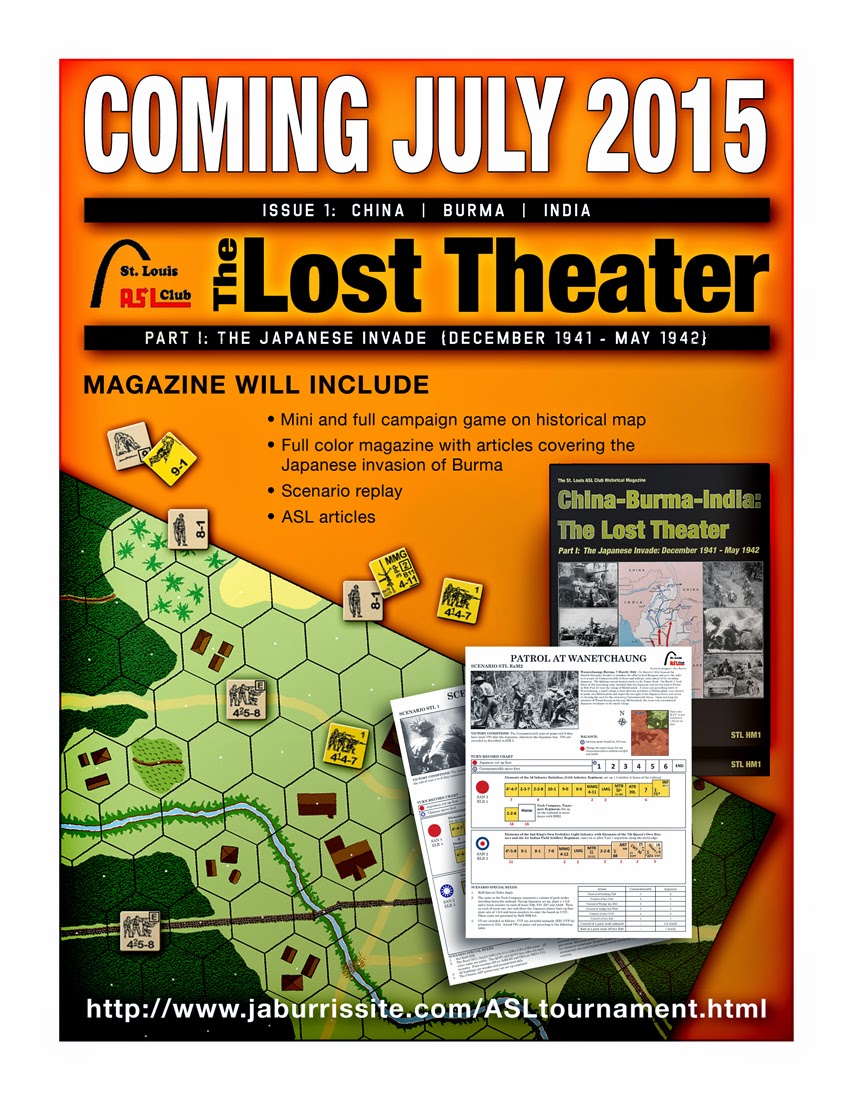 In 1925-29, the Imperial Japanese Army Cavalry School based at Chiba tested several foreign tanks for its needs. The Carden-Lloyd tankettes appeared to be the best suited for their purposes.  The Japanese purchased several of these British tankettes and served as a basis for the first Japanese tankette in 1929.  The production went to Ishikawajima Motorcar Manufacturing Company (now Isuzu). As vehicles were intended for the cavalry corps it couldn't has been classified as a tank but was officially called a “Heavy Armored Car” instead, taking the number 92 in the imperial army ordnance register. 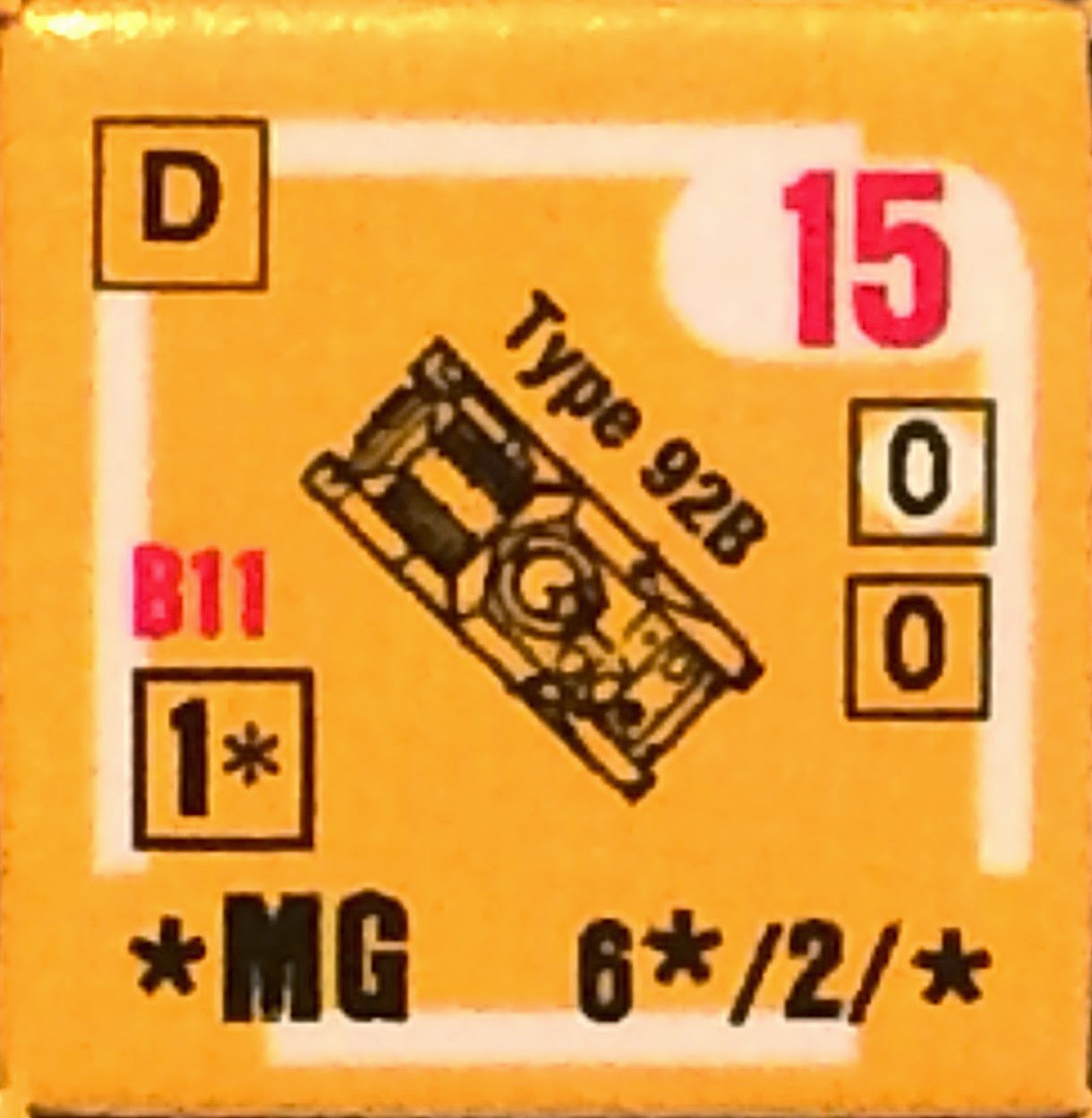 The Type 92 was larger than most tankettes of the time, having a one-man turret and a crew of three.  The armament was generally two machine guns. The main gun was a 13.2mm Type 92 heavy machine gun. The weapon had limited traverse, but included a pivoting eyepiece on the gunsight optics and a high-angle mount, allowing anti-aircraft use. Secondary armament was a 6.5 mm Type 91 machine gun, replaced later by the 7.7 mm Type 97 light machine gun mounted in the manually traversed turret. The armor was thin, between 6mm in the hull to 12 mm in the turret.  The thin armor and light armament allowed the weight to be kept to 3 tons.  This proved to be problematic, though, as the armor was not thick enough to be able to withstand any machinegun fire.

The vehicle underwent several modifications, especially in the drive train and suspension.  An initial variant was designed to be amphibious, but this model was dropped for the early Type 92.  However, the later Type 92 had a significantly improved suspension and wheel configuration, which allowed for better performance.

Here are a few photos and drawings of the tankette:

This is a photo of the early model with two light machine guns. 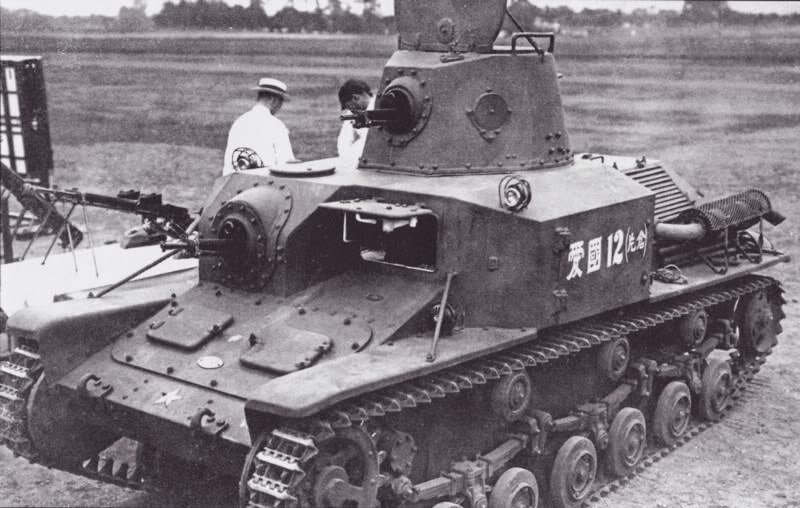 This is a drawing of the late model with the 13.2mm MG in the bow and the improved suspension. 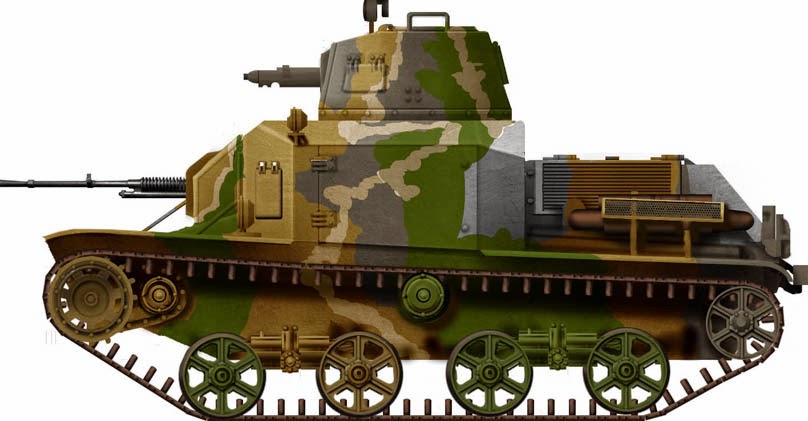 A drawing of the early model with the 13.2mm MG in the bow. 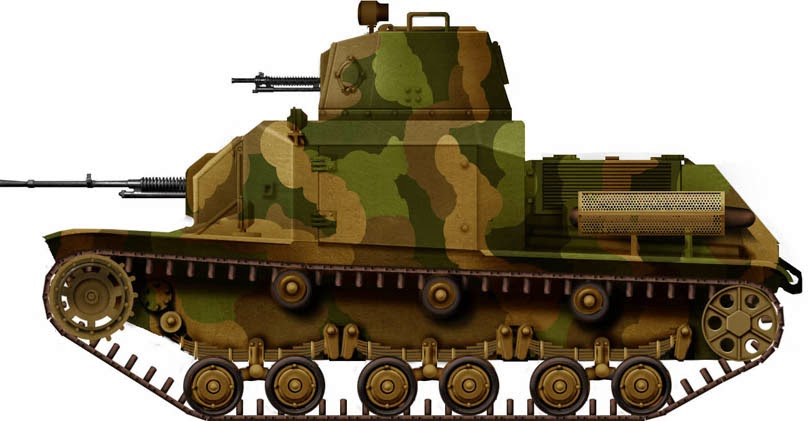 Posted by Brett Avants at 7:53 PM No comments:

Many people may already know about these two links, but if not, please check them out.  One is the U.S. Army Center for Military History.  This site has a ton of pdf files, including good pdf files of the Army "Green Books" series on the History of the U.S. Army operations in World War II.  There are numerous other monographs and books on subjects ranging from our Revolutionary War in the 1770's to current operations in Iraq and Afghanistan.

The second link is the U.S. Marine Corps History Division Publications page.  At the bottom of this webpage is a list of links for time periods that contain tons of USMC reference material.  The World War II and the Korean War sections are especially useful.  But there are tons of downloadable books and pamphlets in PDF form that will enhance anyone's reference library.


Posted by Brett Avants at 7:31 PM No comments:

I just received Lone Canuck’s ASL pack Crossing the Moro the other day and thought I would write a short out-of-the-ziploc bag review. 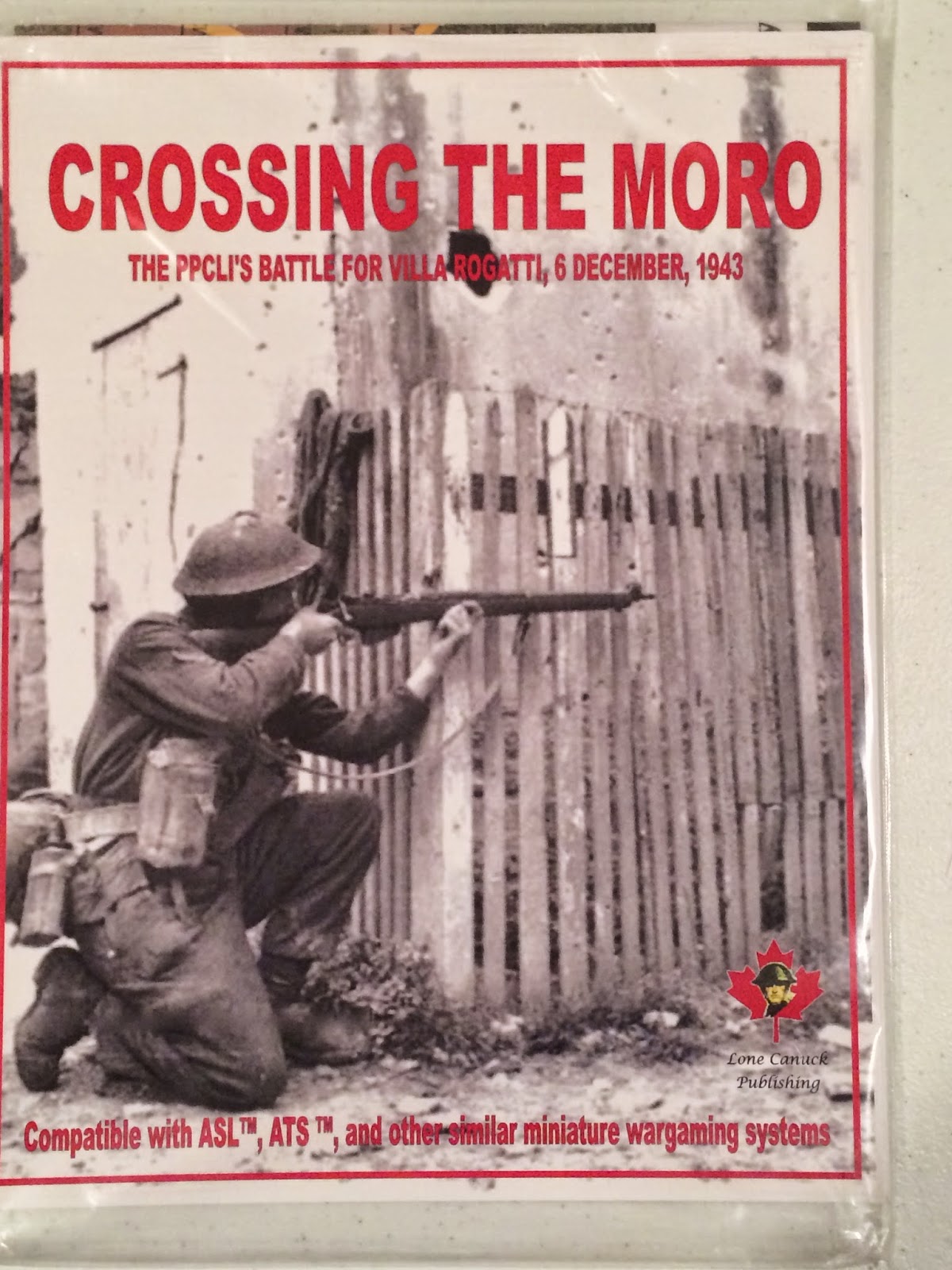 I have not played any of the scenarios or the campaign game but the whole package looks really nice.  It comes with a nice 22 inch x 32 inch map on good quality paper, 4 pages of background history and 16 pages of campaign game rules on high quality bright white paper, and 4 scenarios on light card stock.  Overall, a nice presentation of high quality materials.  And all for $23.00.  These new Lone Canuck tactical missions are a great value for the money.  This one, along with Bloody Buron, Ozerekya Breakout and Purple Heart Draw are all great values and should provide veteran and novice squad leaders lots of opportunity to engage in battle. 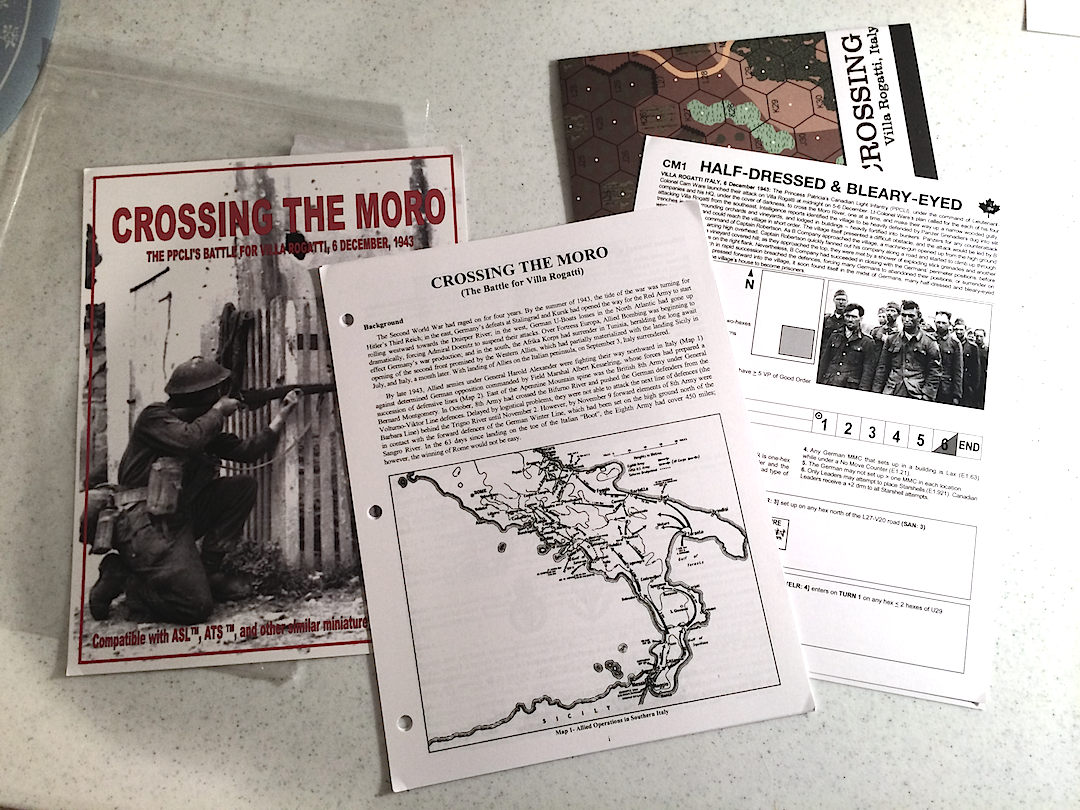 The 4 scenarios are fairly small in terms of counter density, and are all played on sections of the map.  None of the scenarios are played on the full map, but that’s what the campaign game is for.  Two scenarios, CM1 and CM2 use night rules.  CM4 uses a full combined arms countermix on both sides, with infantry, mortars and OBA, and armor.  The Germans get 5 Panzer IVF2s and 4 Panzer IVHs.  Yikes!  This one looks like fun.

I am not a big campaign game player (although I’d like to be…).  So if you are not a campaign game player, you may not get the most bang for the buck.  But just looking through the rules, these look like they would make a great introductory campaign game for those who haven’t yet jumped into this aspect of ASL.

The map is printed on high quality paper that reminds me of the same quality that the MMP HASLs are printed on.  The colors are good and the terrain features are very sharp and clear.  While this map was probably not painted but done on a software program, it still looks great.  This one is littered with vineyard hexes printed on the map.  This is a “high ground” battle, with the Villa Rogatti village on a high hill.  The terrain on this map could be a butt-kicker. 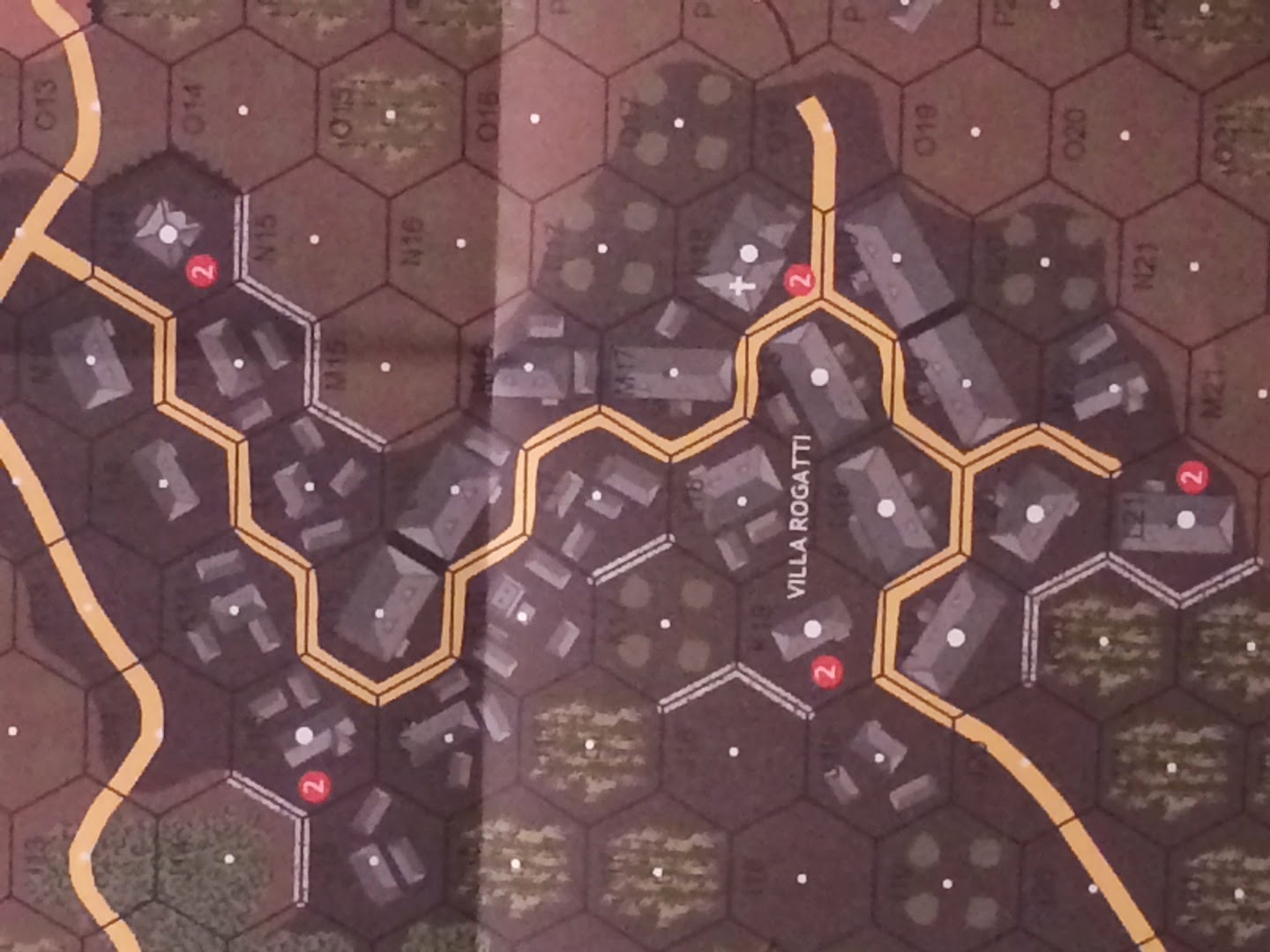 Canadians against the Germans in Italy.  This one looks like a blast!
Posted by Brett Avants at 9:23 PM 1 comment:

I have always loved Advanced Squad Leader.  Critical Hit’s ATS system is also good, as are a couple of other systems such as Panzer, Fire Team and Firepower.  However, most of the squad level combat systems pretty much adhere to World War II.  There are some exceptions, Firepower and Fire Team come to mind, and Critical Hit has attempted to venture into uncharted territory with Genesis 48 and Dien Bien Phu modules for ASL and ATS.  The Panzer system had MBT and IDF, with reprints/updates on the way from GMT.

But I have always wanted to take ASL in particular into the post-World War II era.  Right now, MMP is getting ready to roll out their KASL – Korean War ASL module.  This is awesome and I can’t wait for this to come out.

But what about other wars?  The majority of the Arab/Israeli Wars were fought with equipment that was not substantially different than its World War II predecessors.  Up until even 1973, the Israelis had modified Shermans, while the Arabs still had some T-34/85s.  Patton tanks, Centurions, T-55s and T-62s were not that much more advanced than their earlier counterparts.  RPG-2s and RPG-7s were only marginally better than the Bazooka or Panzerfaust.  Small arms were still similar.

Basically, there is no real reason why gamers cannot reproduce engagements from the 1948, 1956, and 1967 Arab-Israeli Wars in ASL.  Or even engagements from the Korean War, the South African/Rhodesian Wars, the Indo-Pakistan Kashmir conflicts, the Sino-Vietnamese border wars, the Angolan Civil War and other African Civil Wars, etc.  You name it.  ASL should be able to accommodate it.

Now, I will admit, once we get into the 21st century with increased lethality of the main gun armaments, body armor, increased accuracy of artillery and communications, air support by fast moving jet aircraft, things might get a little dicey.

There was a move some time ago to bring ASL into the era of post-World War II combat.  MASL, modern ASL.  While some work has been done, my passion is to build on this and attempt to create an Arab-Israeli module that allows one to play scenarios from 1948, 1956 and 1967.  Critical Hit tried to do this with Genesis 48 and the new Genesis II, but I am not sure they captured the essence of either army, their respective quirks and the tactics and equipment used.  We’ll see how it goes.  In the meantime, take a peak at the DRAFT new counter for the RPG-7.  I'll probably wind up changing some of the values, but here you go.